FREE SHIPPING OVER $50 | VOLUME DISCOUNTS | BEST PRODUCTS IN THE INDUSTRY!

This listing is for THCO, click here if you are seeking Granddaddy Purp Delta 8 Vape Tanks

Granddaddy Purple is not only one of the most popular west coast Indicas -- but it's also one of the most potent. Famous for coming from Ken Estes' 2003 Grand Daddy Purp cross of Purple Urkle and Big Bud, this top-shelf Bay Area staple comes highly recommended by growers and connoisseurs.

In Cannabis plants, Granddaddy Purple offers large yields, with nugs that are resinous and dense. This strain is famous for its complex tastes, which are described as something between sweet berries and fresh soil. The vape is equally as powerful, leaving consumers feeling happy and relaxed.Over the past decade, Granddaddy Purple has become one of California's most popular varieties. In fact, this popular Bay Area strain has made appearances in several movies and TV shows, including Californication, A Very Brady Sequel, and Cropsey. Not surprisingly, it's also been featured in High Times' Cannabis Cup as well as winning the 1st place Indica Cup at the Emerald Cup in 2010.'Grandaddy Purp' is an Indica strain that has a sweet, earthy, and floral fragrance. Its effects tend to be soothing, tired, and hungry.

Grandaddy Purp smells like fresh cannabis. It is a really sweet smell, very almost like violet, but in a good way. The smell reminds me of Kush. It's also very earthy."

"GDP has a great psychedelic effect and strong couchlock. I hated getting high on it because it was so potent, but I really liked the benefits."

"I like it because I grew up with the OG Kush. I think the taste is similar to OG Kush. It's a very mellow strain; it's not very overwhelming when you smoke it."

"Grandaddy Purp has a great aroma, earthy and citrusy. It has a surprisingly smooth flavor, but when exhaled into your lungs, you can smell the lemon." 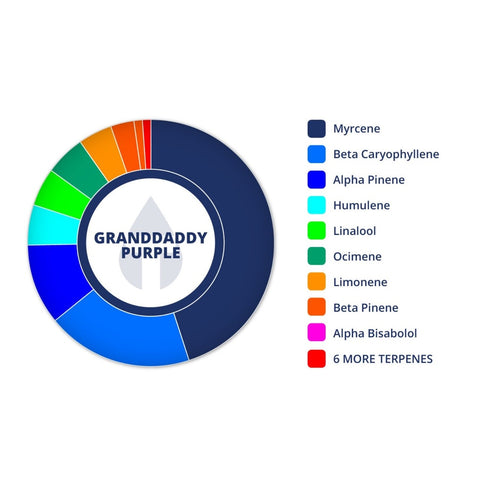 More from The Bear